Welcome to the game.

In this witty interior, the organization of spaces is based on a common computer game narrative, "map of quests," or a "search and find" principle. In this case, "strange spaces" and "weird objects" are meant to be discovered.

Melsoft is an international mobile game developer. The Lithuanian branch is located in the K29 Business Center in Vilnius.

The integration of soft sculptural elements into a functionally monotonous space became a vital tool for the design. In other words, the innovative elements of the spaces acquired a soft body, which, in addition to their primary function, serve the rooms aesthetically and acoustically as well.

At first glance, the new additions may seem to contradict the existing character of the building, however, the "strange objects," with their sleek forms, actually extend the rules of the game into the existing system visually, and their size lightly "flirts" with the scale of the spaces.

The Sleeping Giant or Dreadlock

This object serves as a "landmark" for the interior. As visitors ascend to the office, the object can be seen from the elevator thanks to the existing, transparent "glass" architecture. Therefore, before entering the office, it is not the reception desk that catches the eye, but rather a gigantic, tangled figure looming in the distance. The character creates a sense of intrigue and draws the visitors in closer.

An enormous sofa is curled up in the corner in the highest part of the office, where the open workspaces are configurated. Its volume defines the space and creates an additional area for relaxation, informal meetings while simultaneously absorbing ambient sounds. The sofa is upholstered in a handmade "long-haired" fabric. This object is an indirect reference to one of Melsoft's protagonists. At the same time, the object provides a therapeutic function. One can "dive" into the furniture and feel embraced.

To counterbalance the sleeping giant, next to it stands a super-tall and slim volume wrapped in a black felt exterior. To one's surprise, the narrow object houses a meeting room inside. Ultimately, this design move creates a play of scale in the space.

The kitchen is very densely planted with vegetation on the inside as well as the periphery. As a result, the space becomes an oasis in the greyness of the workspace, which is a reference to a quote from one of Melsoft's games .

Sleep Ring with a mini pole for dancing

A pink mattress fills the furthest corner of the office and echoes the irregular geometry that signals a place for relaxation across the workspace. The thin pipe, an existing element of the building's communication system, could not be demolished and was integrated into the object, ultimately becoming part of the game.

These suites are home to the game team managers. These rooms have no right angles and are covered with acoustic foam cones.

The Cave is a seating area built into the wall. From a distance, the cave appears to be smiling.

The workspaces are grey. And not because work is boring. 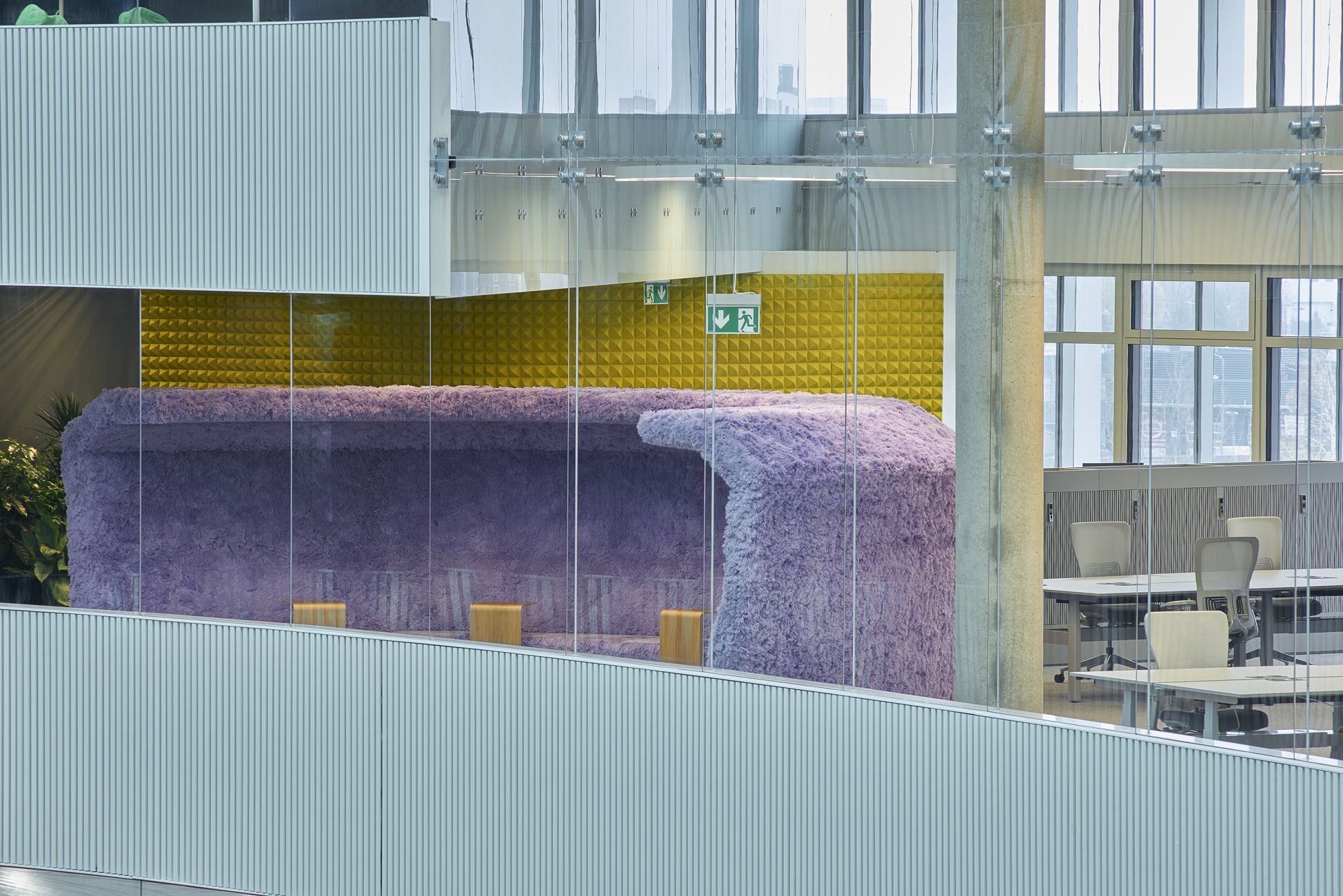 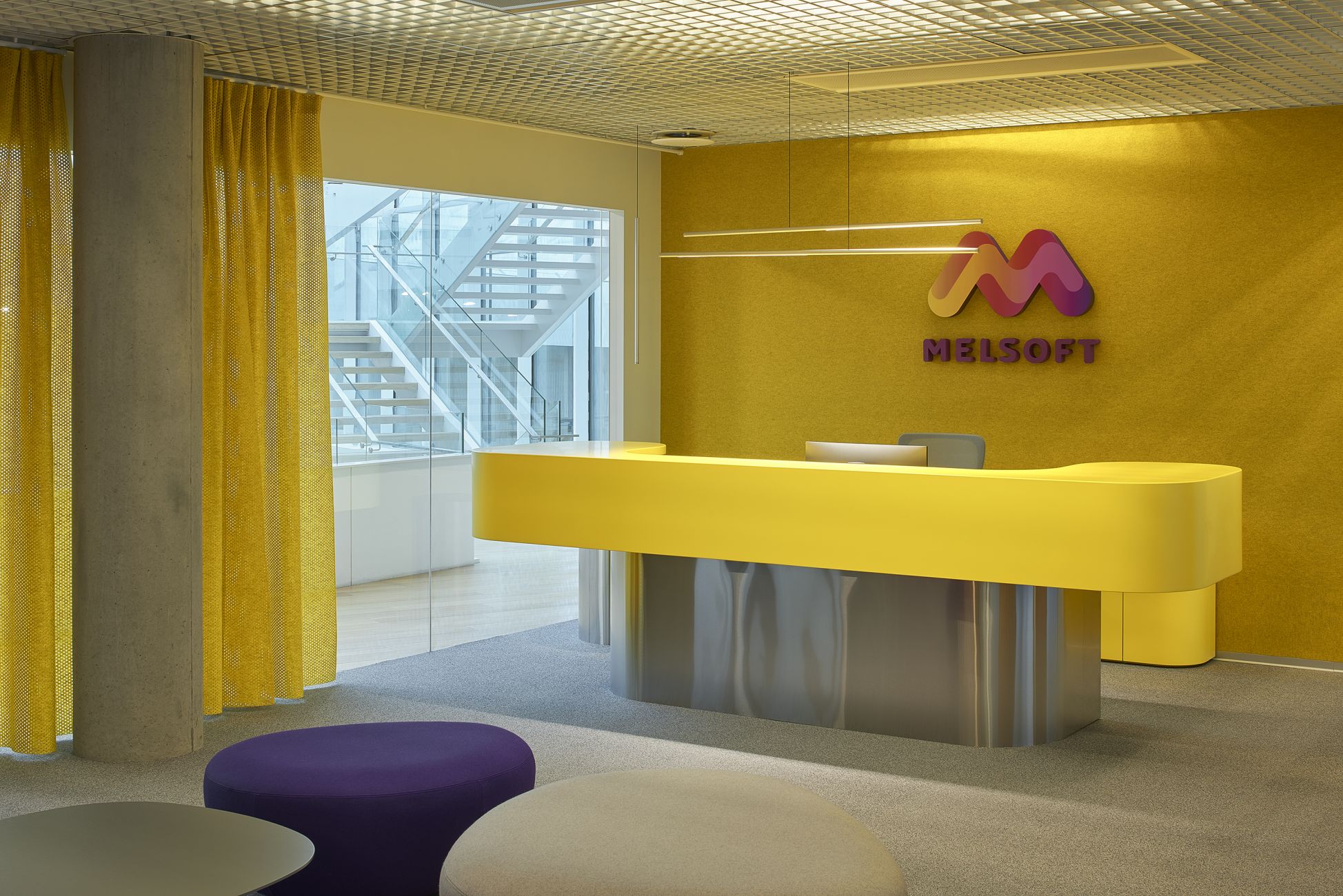 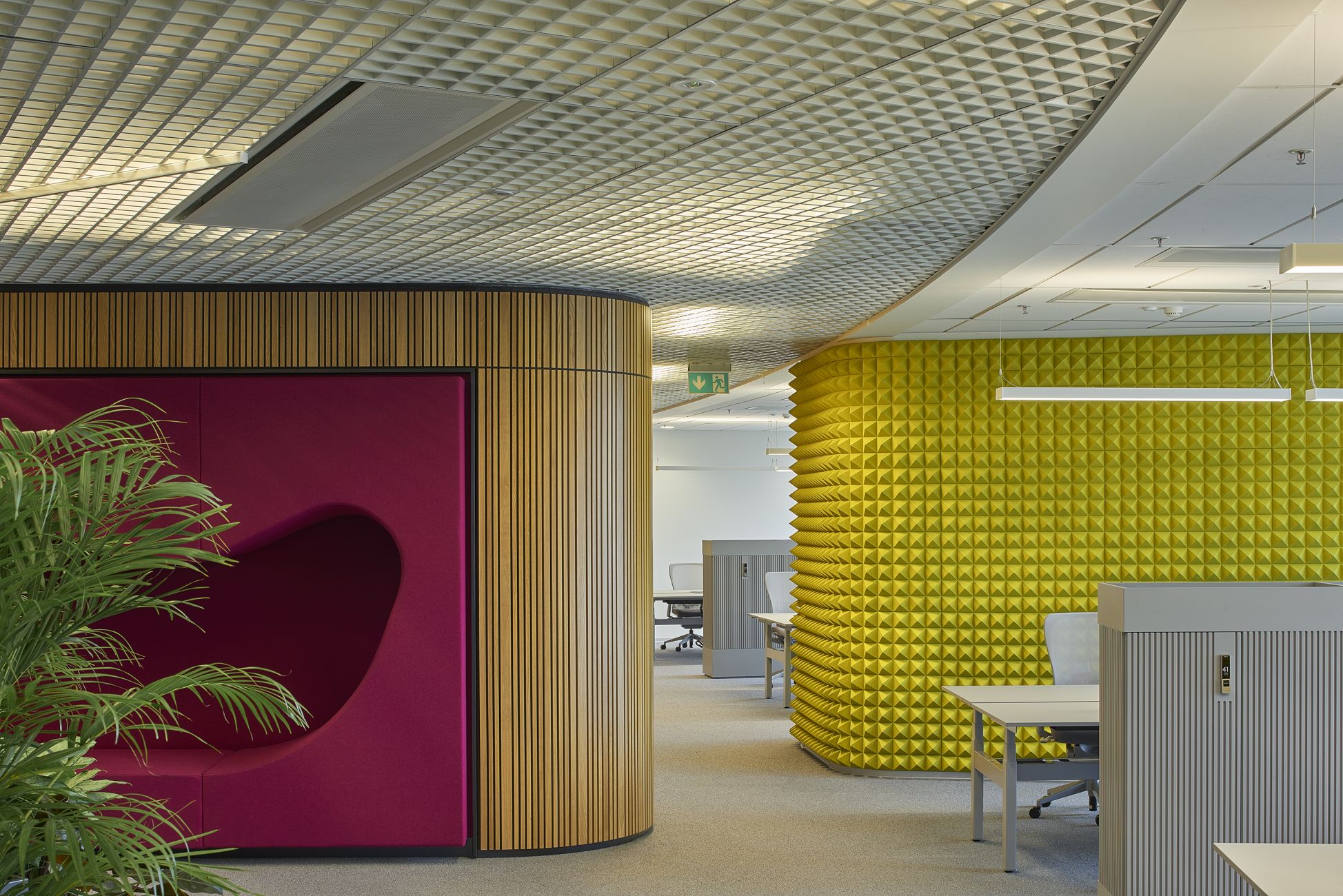 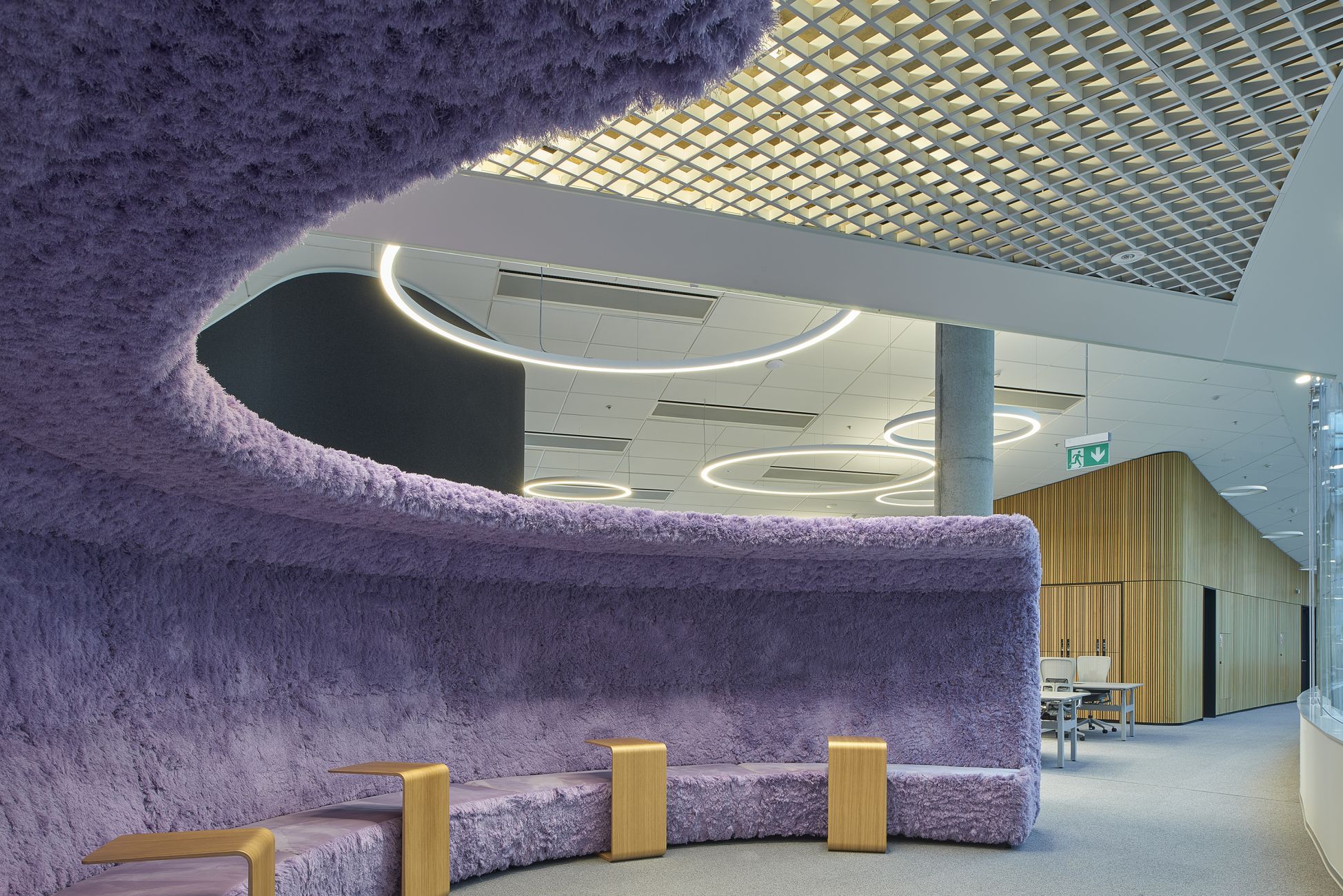 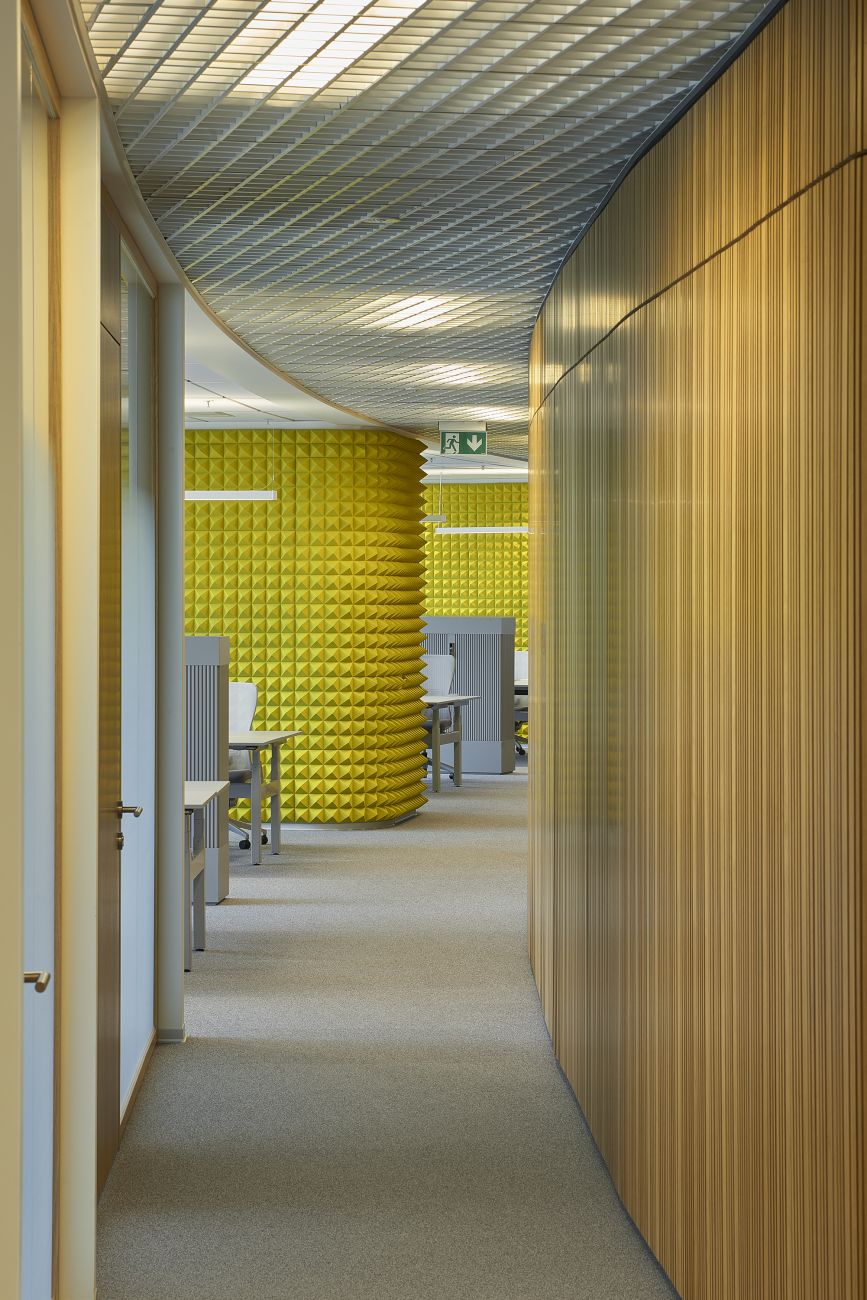 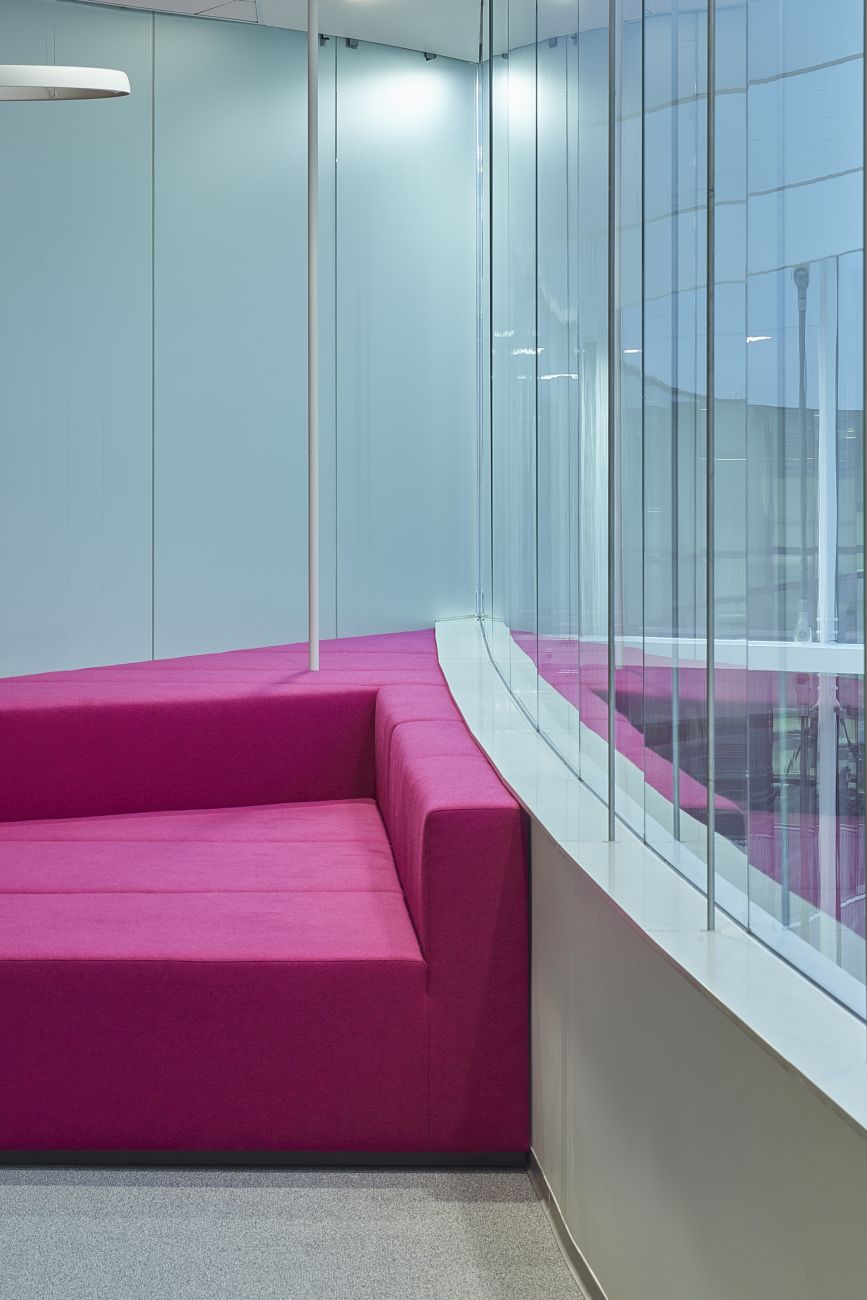 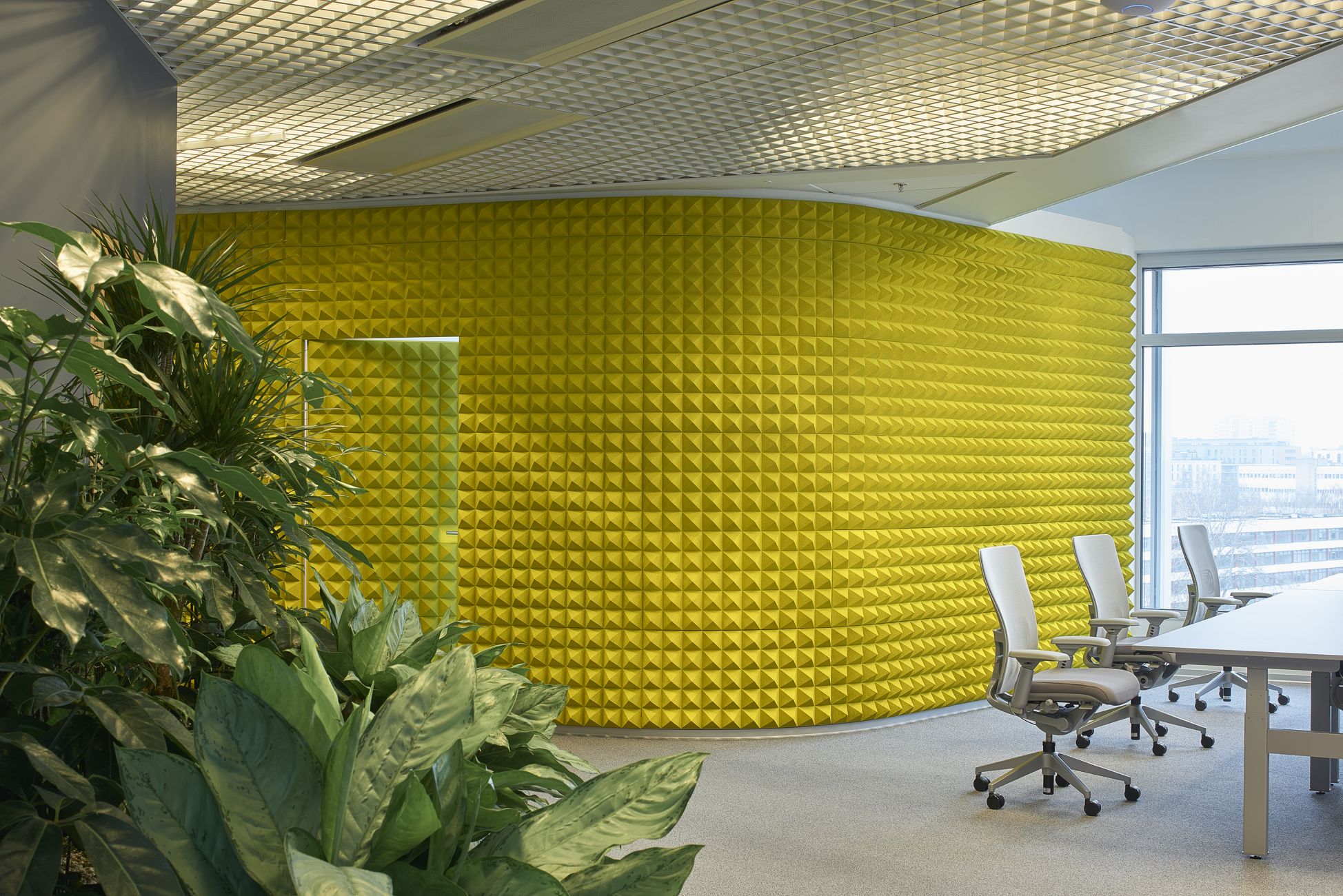 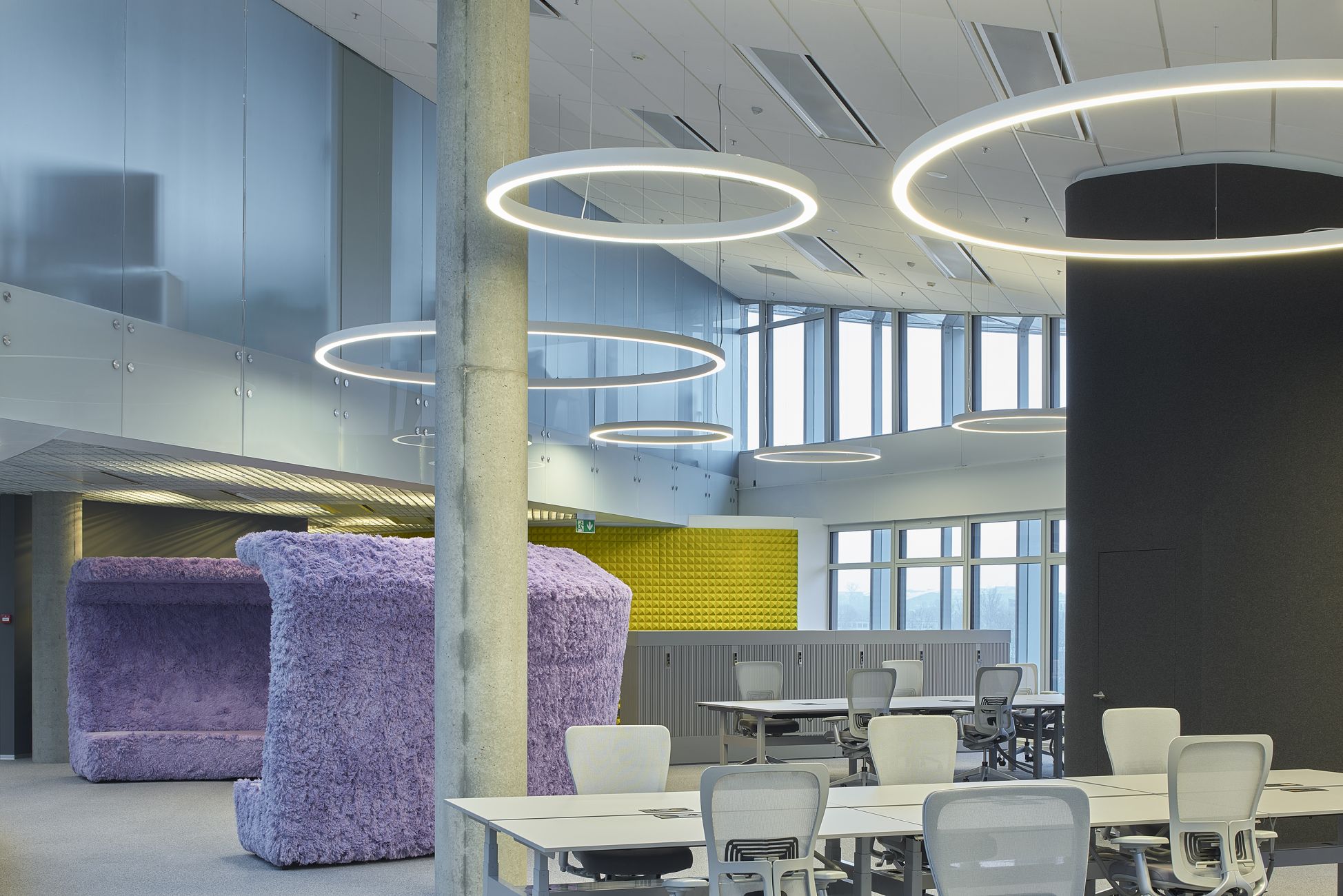 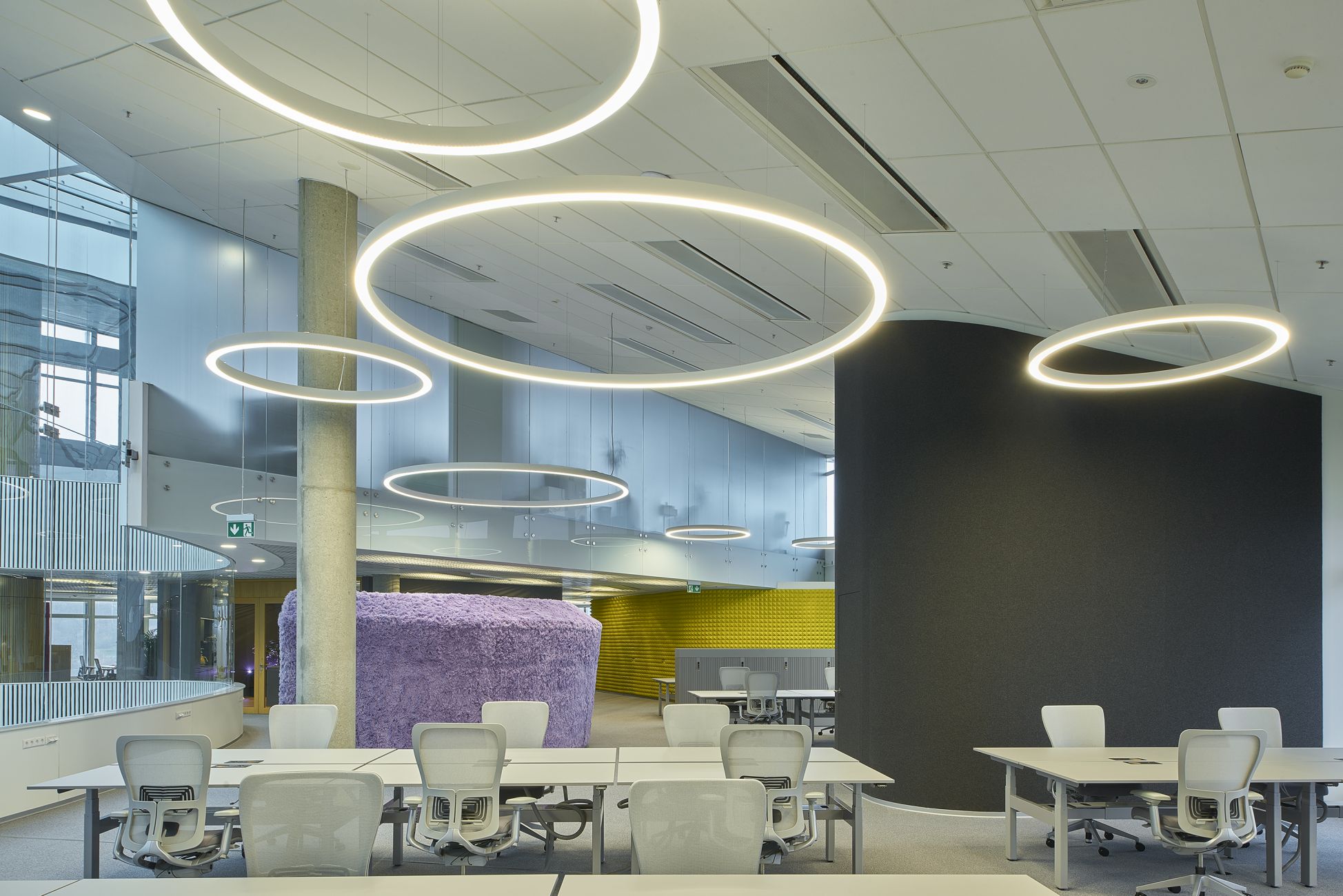 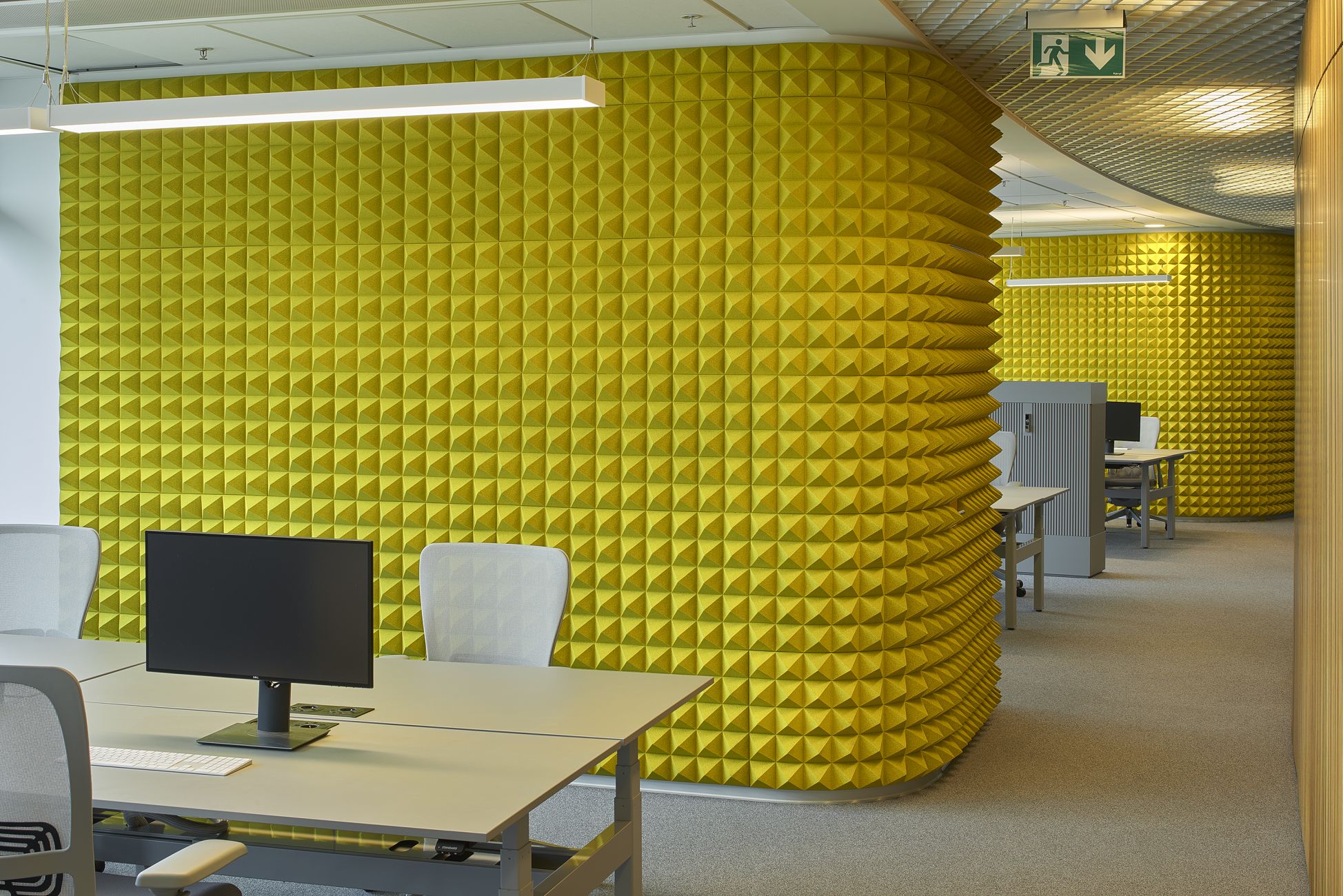 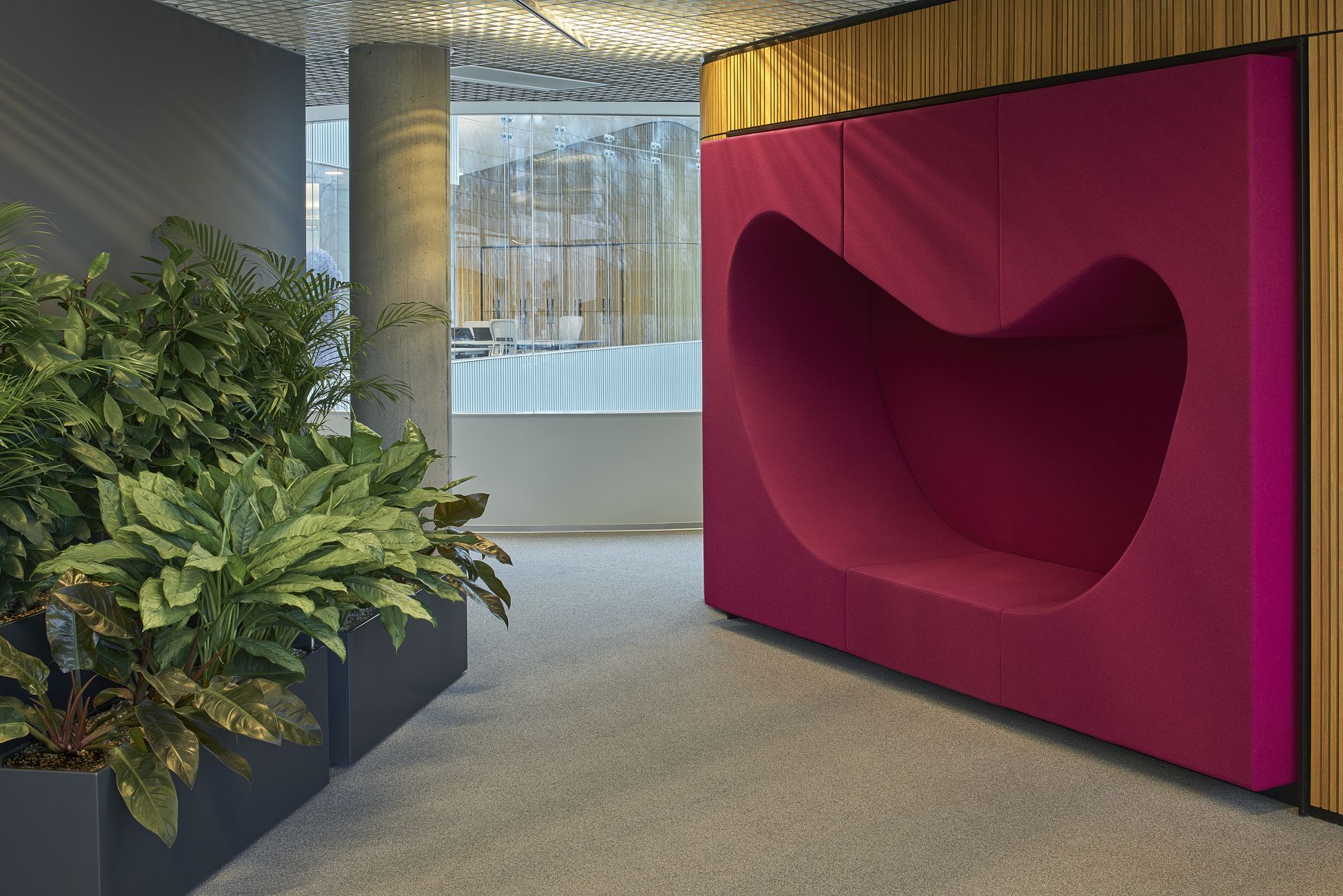 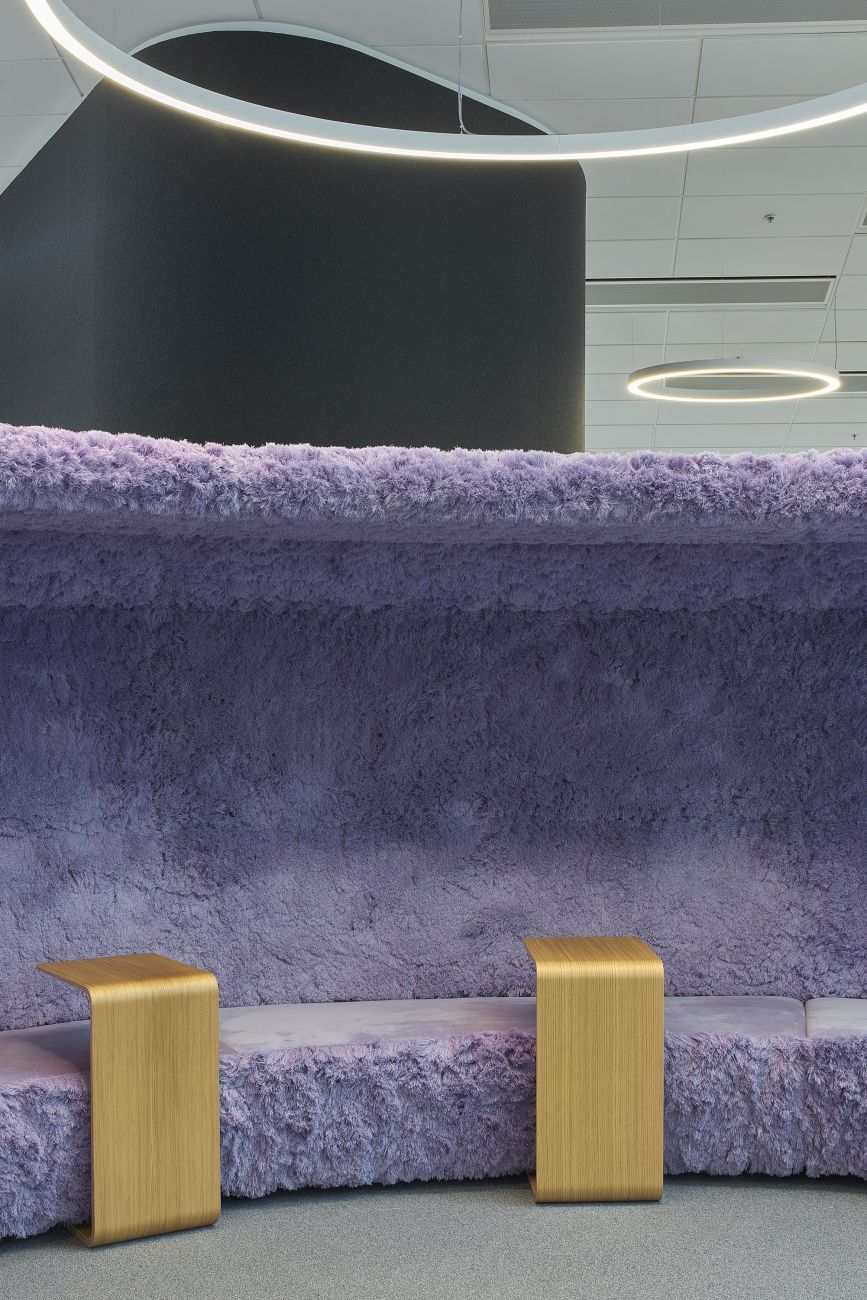 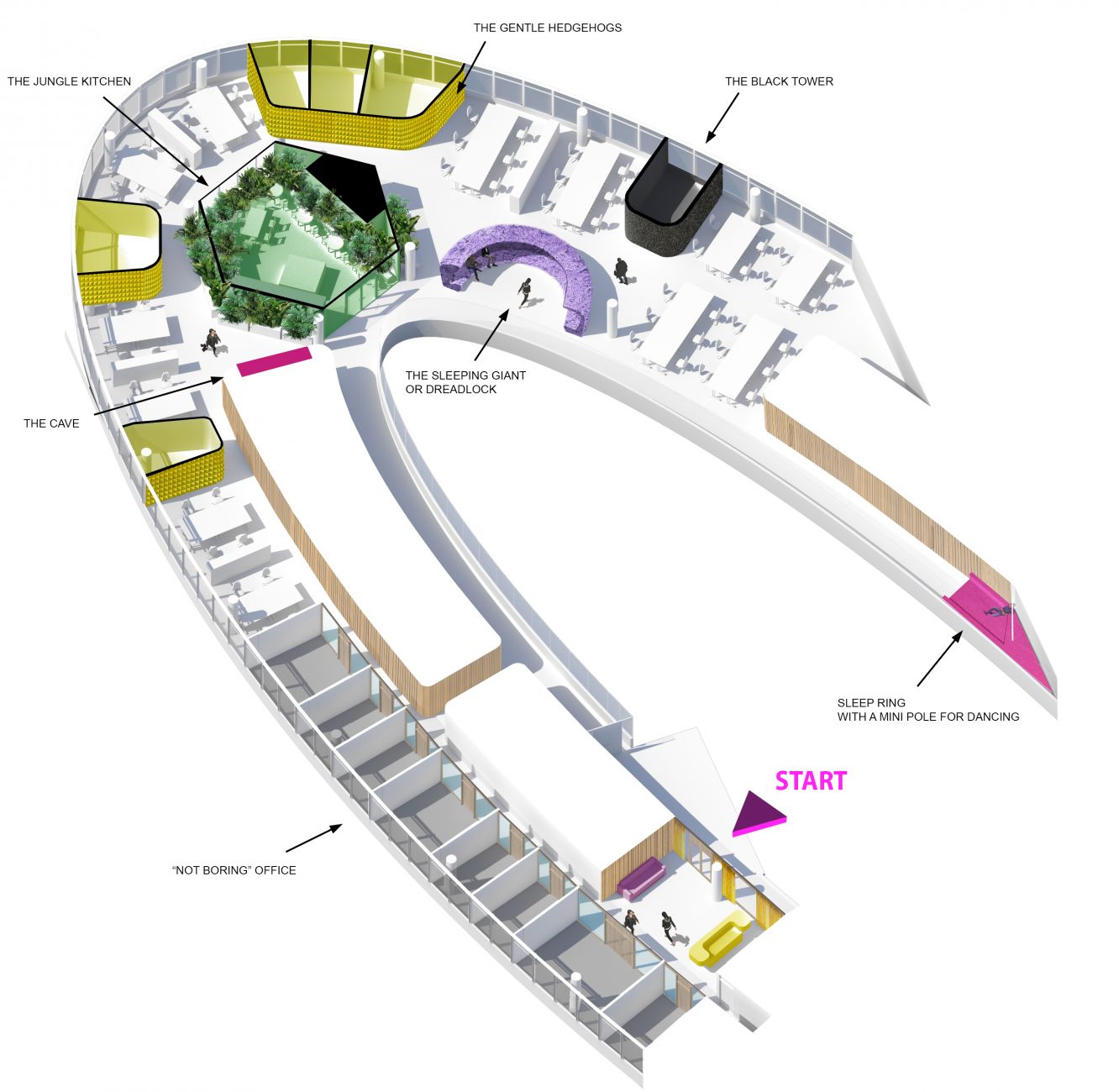